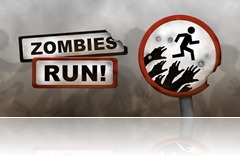 Zombies, Run! is an audio adventure running game where you run, walk, or jog your way to victory in the real world. You can even do this to your own soundtrack by selecting music on your device. As you wander around your day to day tasks in the real world, you pick up items that range from bandages to boxes of light bulbs. Using these supplies you’ve picked up you get to strategically reinforce your home base. Part strategy, the game lets you choose how to upgrade your base, and manage who gets those useful supplies. Activating the zombie chase mode adds even more entertainment as you have to break out into a sprint (or increase your current walking speed by 20%) to escape the zombies chasing you. The looks you will get while at the mall, suddenly sprinting down the corridor, running away from pretend zombies is alone worth the entire game.

But it isn’t just a mindless game; there is a whole mystery to be uncovered as you progress. You end up in the town of Abel, one of the few living communities left. Outside the walls of Able Township are zombies, a lot of zombies. As you progress through the game you complete missions which can range from distracting zombies for a fellow citizen, to going out to retrieving much needed supplies. Each mission is about 30 minutes long and in between your music tracks the game will progress the story.

The game has been out for a while for iOS devices (iPhone, iPod touch) but has just recently been released for Android, and is coming soon to Windows Phone. I downloaded the game as soon as it was available for Android as I had recently heard about the game and I thought the idea behind it was very unique. I have used other running apps like RunKeeper (an app that plays your music and lets you know your time and pace while running) but with Zombies, Run! it not only tells you how far you ran at the end of the mission, but it also adds the element of a story to your running. However there are plans for Zombies, Run! to get integration with RunKeeper.

The game has about 19 different characters that you will meet throughout your progress, with about 46 different items you can collect. At the time of writing this review I am on mission 12. I have only met 8 characters and found 30 different items.

Another interesting feature of Zombies, Run! is that it has the ability for you to view your runs online with a feature called ZombieLink. Here is one of my own runs as an example: http://www.zombiesrungame.com/theDXT/87447. They are currently working on adding more features like what songs you ran faster to, and calories burned in your run. They are also creating more mission packs that you can use with the game.

On the Android version there are some bugs but they are being worked on. The iPhone and iPod Touch versions shouldn’t have a lot of bugs as they have been out for a while now. If your wanting to start running but don’t have the motivation to do so I would recommend you get this app. What better motivation is there than zombies chasing you about?

Cons:Has a few bugs that need to be worked out.